In the year since we graduated #Picademy my fellow graduate @CatLamin has been super busy. Amongst all the amazing stuff she does in our community Cat organises the Twickenham Coding Evening. Cat’s initiative was to set up a relaxed, informal environment in which educators and local community members interested in programming and the new Computing curriculum could come together for a pint and some food, support, networking and resource sharing. as you can imagine the evening was a huge hit. Cat has now organised four events since January 2015 and other members of the Coding and Education communities are starting to contact her about setting up their own (follow the link above if you’re interested) including me!

Peterborough’s first Coding Evening took place on July 7th 2015. I reserved out an area of a local pub and we turned it into Geekdom! Our gathering included local teachers, TA’s, potential school volunteers and members of the local community. 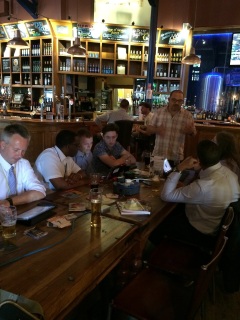 We were also extremely lucky to have the lovely @Geeky_Tim who is one of orgaisers of @CambridgeJam and also the wonderful @WhaleyGeek who co-authored Adventures in Minecraft and had spent all day with the BBC releasing the BBCMicrobit. We were also lucky enough that he brought along a flip the egg frying pan game that used the Microbit (except I kept calling it a MicroBOT because I’ve been studying Big Hero 6 with my English class).

Tim brought along Raspberry Pi’s and HDMI-Pi’s and we had people involved in Minecraft and trying to program RGB LED’s through Scratch. A couple of people went away with a lent out Pi kit on the proviso that they have to come back with it and show us something cool they have managed to do. Discussion was flowing around the new curriculum and what resources people are using and having started at 4.30 those of us that were still going strong at 8pm sat down to get some food. The evening was a great success and as a result I will be running one every two months which seemed to be a regularity that everyone agreed on. So if you’re in or around the Peterborough area please contact me @digitaldivageek (Twitter) or digitaldivageek@geektools.com and come along!

“Really well organised amnd resourced – I had wondered whether we might be sitting around in a circle saying “Errrr…”, but it wasfar too well planned for that to happen!….Re-inspired to play with the RPi!”

Join us for our second coding evening here.

< Previous Next >
+ Add your own event Eventbrite